Asbestos, a group of naturally occurring minerals, which have been declared carcinogenic by multiple U.S. government agencies, has been widely prevalent in numerous materials and products until the 1970s when the serious health risks associated with exposure were formally confirmed. Due to the fact that low levels of asbestos are also present in the environment, virtually everyone could have been exposed to it at one point during their lifetime. However, the risk of developing an asbestos-related form of cancer such as mesothelioma or lung cancer typically increases with the dose of inhaled or swallowed fibers, as well as with the duration of exposure. Consequently, people whose job involves contact with significant amounts of asbestos (construction, manufacturing, and mining, for instance) are particularly more likely to be diagnosed with one of these malignant diseases.

How Does Exposure to Asbestos Occur?

Asbestos fibers become a health hazard only when they are airborne. A commonly encountered situation refers to asbestos-containing materials and products in houses built before the 1980s, when the use of the carcinogen in construction was more frequent. When brittle insulation, heating ducts, and floor tiles are disturbed, fibers of asbestos are often released into the air and subsequently inhaled or swallowed by the inhabitants. Similarly, when the work environment entails contact with great levels of asbestos, employees who are not wearing appropriate protective equipment are at a very high risk of being contaminated. The gradual accumulation of asbestos fibers in various organs and regions of the body may lead to the development of cancer several decades following first exposure. 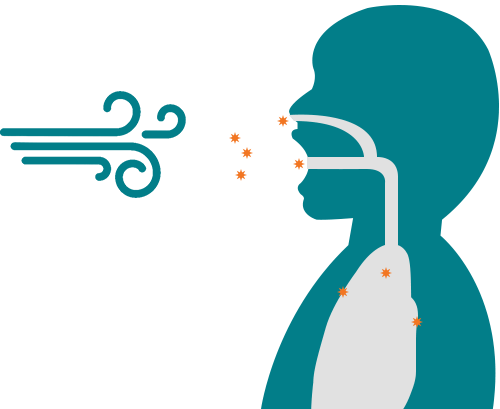 Although occupational exposure is primarily responsible for asbestos-related cancers, it is not the only factor, which can lead to the development of such conditions. Secondary exposure, as well as environmental exposure, can also pose a serious threat to one’s health.

Occupational exposure is undoubtedly the most common way in which contamination with asbestos fibers occurs. It is estimated that between 70 and 80 percent of the patients diagnosed with mesothelioma, a very aggressive and rare form of cancer, have been extensively exposed to asbestos in the workplace, while occupational exposure accounts for 5-7% of all lung cancer cases in the U.S. Due to the high frequency and prolonged duration, this type of exposure is also the most dangerous, as it leads to the gradual accumulation of large amounts of fibers in the body. The following jobs involve a particularly increased risk of developing an asbestos-related form of cancer:

Nevertheless, veterans represent the largest group of people suffering from mesothelioma, accounting for approximately 30% of all diagnosed cases in the U.S. Due to the widespread use of asbestos between the 1930s and 1975 by all branches of the U.S. Military (preponderantly by the Navy), thousands of veterans who served during that period of time are nowadays affected and their number is unfortunately increasing. 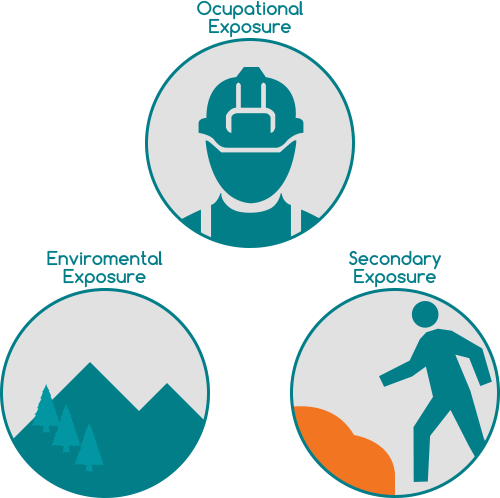 Secondary exposure refers to asbestos exposure, which does not happen following direct contact with airborne minerals in the workplace. Families of employees who work with asbestos on a regular basis are frequently affected by this type of exposure. Asbestos fibers can remain on clothing, shoes, and skin, as well as in the hair if appropriate workplace practices are not enforced in order to completely remove the carcinogenic minerals at the end of the day. Thus, spouses and children have a high chance of inhaling or swallowing asbestos fibers brought into the house by workers. However, secondary exposure is less common nowadays, as stricter workplace regulations have been applied in this respect for the majority of high-risk occupations.

Even though low quantities of asbestos are naturally present in the environment, particularly in the earth, there are certain locations where asbestos fibers can be found in higher concentrations. Areas surrounding asbestos mines are probably the most hazardous places associated with environmental asbestos exposure, as significant amounts of fibers are released into the air following regular mining operations. Therefore, people living in such high-risk areas are more likely to develop a form of cancer associated with prolonged exposure. Another common circumstance in which environmental exposure may occur is when buildings whose structure contains asbestos are being demolished. Even though a series of specific regulations regarding the safety of such operations have been enforced, people living nearby construction or demolition sites are not entirely protected from contamination.

How Does Asbestos Lead to Cancer?

It is worthy of note that asbestos-related cancers, regardless of their type or location within the body, typically entail a long latency period of several decades. Lung cancer can thus develop after 10-20 years following initial exposure, while pleural mesothelioma usually occurs within 30 to 50 years of the first contact with the carcinogenic minerals.

What Type of Cancer Can Develop Due to Exposure to Asbestos and What Are the Risks?

Although lung cancer and mesothelioma are the main malignant diseases, which may appear after long-term or repeated asbestos exposure, there are other types of cancer which may develop as well. Asbestos might represent a significant risk factor for laryngeal, ovarian, gastrointestinal, colorectal and kidney cancer as well, even though evidence in this respect is currently insufficient. Various studies suggested a correlation between exposure to asbestos and the previous types of cancer, but their results have been deemed inconclusive. 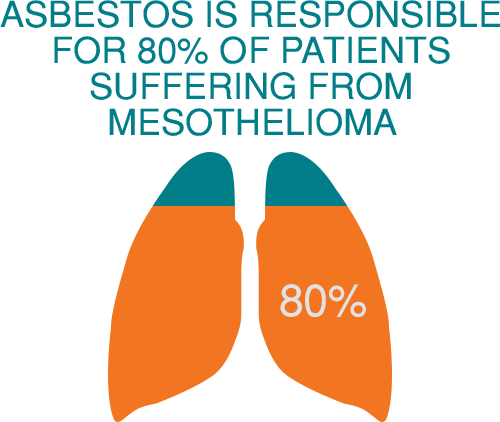 Contamination with fibers of asbestos is responsible for 5-7% of all diagnosed cases of lung cancer, while exposure to the toxic minerals is estimated to account for up to 80% of patients suffering from mesothelioma. Thus, asbestos exposure is both the most serious risk factor and the main known cause of mesothelioma, whereas the majority of lung cancer cases are due to long-term tobacco use. However, it has been revealed that the risk of developing lung cancer can increase by up to 90% if frequent exposure to asbestos is accompanied by habitual smoking. A concrete link between mesothelioma and tobacco use has not been discovered and therefore, smoking is not considered a risk factor for this disease. 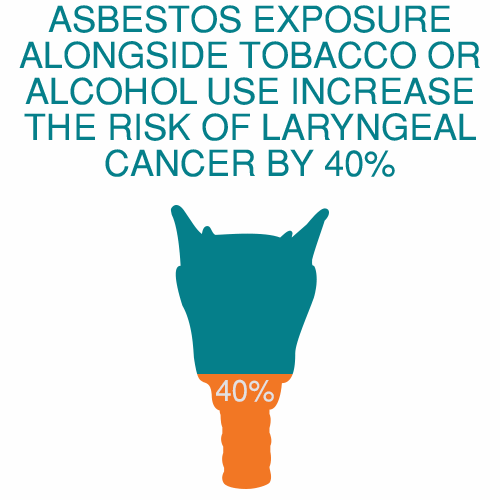 Asbestos exposure has been revealed to be a potential risk factor for laryngeal cancer in addition to habitual smoking and excessive alcohol consumption, which have already been deemed major risk factors. Men are four times more prone to developing this disease. It has also been suggested that the chances of being diagnosed with laryngeal cancer increase with the duration of exposure, as well as with the number of fibers inhaled or ingested. The risk for this disease is 40% higher when exposure to asbestos occurs in conjunction with excessive tobacco or alcohol use.

Despite asbestos-tainted talcum powder having been demonstrated to significantly heighten the risk for ovarian cancer, the results of research in this respect are generally inconclusive. Nevertheless, it has been estimated that the risk increases with approximately 33% for women who regularly use talcum powder as a hygiene product. Fibers of asbestos-contaminated talc can travel through the vagina and uterus, eventually reaching the ovaries, where they may cause severe inflammation foregoing the development of a cancerous tumor.

Gastrointestinal cancer can affect organs such as the stomach, gallbladder, esophagus or small intestine. Although an accurate causal relation between asbestos exposure and these types of malignant diseases has not yet been established, a study published in 2005 found that environmental exposure (such as regularly drinking asbestos-contaminated water) can increase one’s chances of developing gastrointestinal cancer by up to 450%.

The research found that the chances of suffering from colorectal cancer are also elevated when smoking, a major risk factor for this disease is accompanied by prolonged exposure to asbestos. Thus, male smokers who have been in frequent contact with the carcinogen are 36% more likely to be diagnosed with colorectal cancer.

The development of kidney cancer may be correlated with asbestos exposure as well. It has been suggested that the ingestion of asbestos-tainted water could heighten the risk for this disease, as a study from 1979 discovered that fibers of asbestos were present in the kidneys of patients affected by cancer and also in their urine. However, the evidence is insufficient and thus, a strong correlation has not been revealed.

What Are the Main Risk Factors Related to Asbestos Exposure?

Even though no level of exposure is truly safe, there are several factors, which may significantly increase the risk of being diagnosed with an asbestos-related malignant disease such as lung cancer or mesothelioma. The following aspects might influence one’s chances of developing a form of cancer due to exposure: 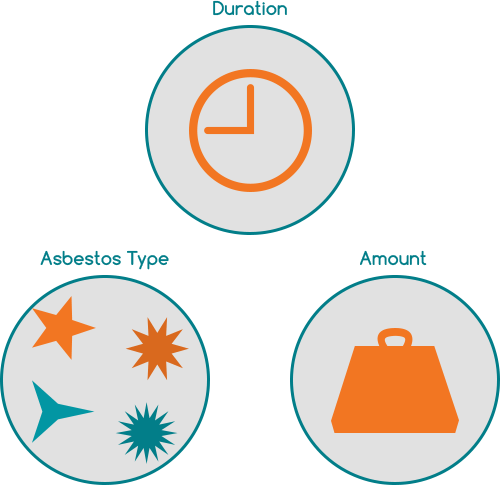