Despite the fact that the dangers of exposure to asbestos have been reliably demonstrated multiple times and are now well-known, the consumption of asbestos-containing products has shockingly increased by approximately 35% between 2010 and 2011.

Although the use and import of asbestos have decreased significantly after the devastating health effects of exposure were formally recognized nearly four decades ago, the issue is far from being resolved. Asbestos is still employed in a wide variety of industries and occupational settings all across the U.S., perpetuating the development of severe and often life-threatening respiratory conditions such and lung cancer, asbestosis, and pleural mesothelioma. Exposure, particularly prolonged or frequent, implies tremendous risks for workers and their families alike since secondary exposure can easily happen as well. The following statistics represent solid evidence that asbestos has been and still is a problem we cannot afford to neglect.

1. Zonolite was estimated to serve as insulation for approximately 35 million buildings throughout the U.S.

Zonolite, a brand of asbestos-containing attic insulation manufactured between 1940 and 1980, is believed to be present in 35 million houses, schools and office buildings in the U.S. The product has a very high concentration of asbestos and is also friable, which makes it extremely dangerous to remove without adequate protective equipment. A professional certified asbestos abatement company must always be hired for the proper disposal of asbestos products in your house, as the risk of exposure during DIY removal procedures is very serious.

2. Approximately 1.3 million employees in the U.S. are regularly exposed to asbestos

According to a study conducted by the American Thoracic Society in 2004, 1.3 million people are exposed to asbestos on a regular basis in the workplace. The construction industry implies the highest risk due to the incredible amounts of asbestos involved. Employees who work in building and equipment maintenance are also very likely to have been extensively exposed to these toxic minerals. If appropriate safety measures such as wearing protective clothing and respirators are not enforced, the chances of developing an asbestos-related disease over time following direct exposure are enormous.

3. 30 million pounds of asbestos is annually used in the U.S.

Asbestos is not entirely banned in the U.S. Even though asbestos mining was outlawed, with the last mine closing in 2002, and new applications are also strictly forbidden, great amounts of asbestos are imported every year, which is subsequently used in various industries such as construction and automotive. Some of the most commonly manufactured asbestos-containing products nowadays are cement pipes, brake pads, corrugated sheeting, vinyl tiles, automobile clutches and roofing materials.

EWG Action Fund estimated that between 127,579 and 159,480 people died from severe conditions caused by exposure to asbestos from 1999 and 2013. Due to the long latency period these diseases typically involve, the majority of them had been exposed to the carcinogenic substances decades before their diagnosis. Asbestosis, lung cancer and mesothelioma, a very rare and aggressive form of cancer, are only some of the severe diseases asbestos can lead to. Nowadays, exposure is responsible for the death of up to 15,000 Americans annually.

5. 11 million people were exposed to asbestos over the course of nearly four consecutive decades

According to the U.S. National Institutes of Health, approximately 11 million Americans have been exposed to these carcinogenic minerals between 1940 and 1978. It generally takes 20 to 50 years for an asbestos-related condition to develop following the first exposure. Consequently, numerous people who have recently been diagnosed with asbestosis, lung cancer or mesothelioma had probably been exposed during that time span. Even though no level of asbestos is truly safe, it has been suggested that the duration of exposure, as well as the amount of inhaled or ingested fibers, might increase the risk of developing one of the previously mentioned diseases.

6. Asbestos is accountable for one in every three deaths caused by occupational cancer

There are numerous forms of cancer which can occur due to regular exposure to various toxic substances in the workplace, including lung cancer and mesothelioma. The World Health Organization estimated that asbestos is responsible for one in every three deaths caused by occupational cancer. Asbestos is still a prevalent raw material used in many industries in the U.S., so the figures are probably not very surprising.

8. Approximately 70% of people involved in the rescue operations following the collapse of the World Trade Center reported new or aggravated respiratory symptoms due to asbestos exposure

Firefighters, cleanup workers, police officers, debris removal workers and all the other people involved in the rescue operations after the 9/11 tragedy were exposed to tremendous levels of asbestos, as well as Lower Manhattan residents. However, those who worked at the Ground Zero site were the most severely affected and up to 70% of them noticed distressing symptoms or the worsening of pre-existent respiratory conditions. Asbestos was employed as insulation to fireproof the towers and, according to the U.S. Environmental Protection Agency, the implosion “pulverized asbestos to ultra-fine particles” which were subsequently spread throughout the Lower Manhattan.

9. By 2002, approximately 730,000 people in the U.S. had filed lawsuits against asbestos companies and their number is currently increasing

Asbestos litigation is one of the longest-running mass torts in the U.S. and is currently on the rise due to the increasing number of asbestos victims. By 2002, 730,000 Americans had filed lawsuits against one or multiple asbestos companies which might have contributed to their asbestosis or cancer diagnosis. Nearly 9,000 companies have been held accountable for neglectful exposure to asbestos so far and funds of over $37 billion have been set aside for compensation. 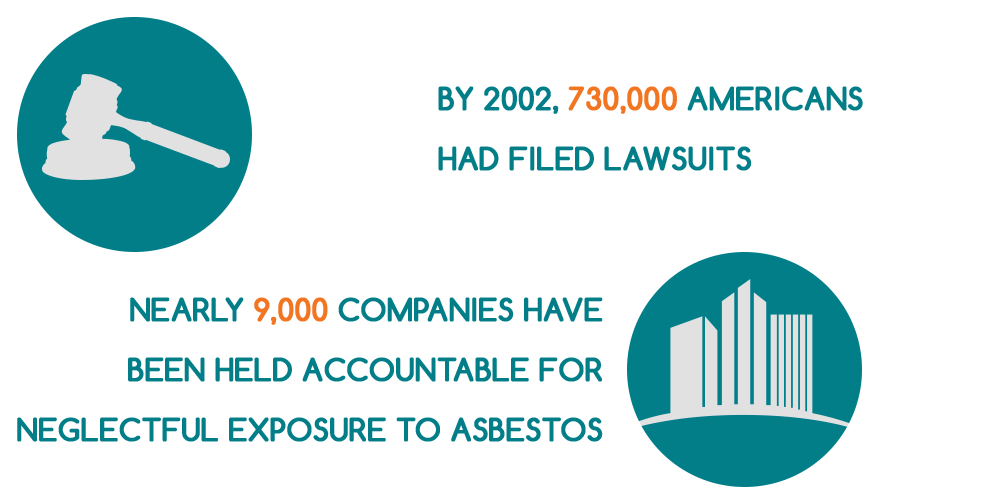 10. Up to 5,000 asbestos-containing products have been manufactured in the U.S. over the course of the last century

From building materials to household appliances, asbestos has been present in a very large number of products until the mid-1980s. It is estimated that asbestos has been used as a raw material or ingredient for the manufacturing of nearly 5,000 different products over the course of the 20th century in the U.S. when the popularity of these minerals was at its highest point. Floor tiles, hair dryers, insulation, cement and roofing materials were only a few of the numerous products made with asbestos.