Exposure to asbestos, a naturally occurring group of minerals, which have been declared carcinogenic by multiple government agencies over the course of the past four decades, is known to be responsible for a series of severe diseases. Asbestosis, pleuritis, pleural effusion and pleural plaques are only some of the conditions, which may develop following prolonged or repeated asbestos exposure, as well as terminal illnesses such as lung cancer and mesothelioma.

Although each of the previously mentioned affections has its own set of specific symptoms, there are several frequently encountered signs accompanying the majority of these conditions. It is also important to note that everyone experiences the following symptoms differently, to a greater or lesser extent, depending on the particularities and severity of each case.

Shortness of breath is generally associated with numerous conditions, ranging from easily treatable, such as bronchitis or sinusitis, to life-threatening. Both lung cancer and pleural mesothelioma are often accompanied by difficult breathing, which is described differently by each diagnosed patient.

The sensation is commonly compared to an intense tightening in the chest, a feeling of suffocation or running out of air. Nearly 80% of people who suffer from pleural mesothelioma experience shortness of breath. 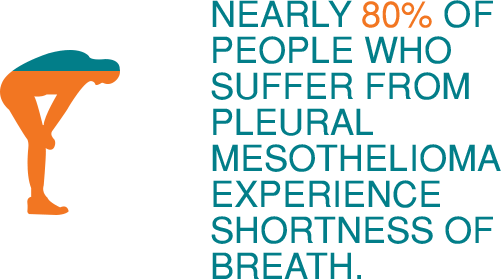 While shortness of breath is considered to be normal after strenuous physical exercise, it may represent a warning sign foregoing an asbestos-related disease. Due to the fact that the respiratory system becomes gradually weakened when affected by asbestosis, lung cancer or pleural mesothelioma, the restriction of breathing capacity is very likely to occur. Moreover, the malignant tumors, which develop with cancer can interfere with breathing as well. If you have been extensively exposed to asbestos in the past, it is highly recommended to seek medical help for a proper diagnosis, since shortness of breath is a widespread symptom of respiratory cancers.

Shortness of breath can be a symptom of the following asbestos-related conditions:

If a cough does not improve within a month or, on the contrary, tends to worsen, it is strongly suggested to seek medical assistance, since a chronic cough may be a sign of asbestosis, lung cancer or mesothelioma. Common respiratory infections such as pneumonia or bronchitis are often accompanied by this symptom.

A cough may be either dry, similar to that encountered in various allergies, or productive. Nevertheless, if you do not experience any other symptoms specific to less severe conditions and have also been in prolonged or repeated contact with asbestos, you may be at high risk for developing a severe asbestos-related disease.

A persistent cough can be a symptom of the following asbestos-related conditions:

When a form of cancer caused by asbestos occurs, feeling constantly tired or worn-out is not uncommon. Fatigue appears due to the body’s attempt to fight malignant diseases such as mesothelioma or lung cancer and the severity of this symptom typically increases as cancer reaches its advanced stages. Additionally, tumors can secrete multiple substances in your bloodstream, which may affect oxygen levels and the function of the adrenal gland, as well as other factors involved in the production of energy within your body. Fatigue may also be accompanied by mood changes and depression. 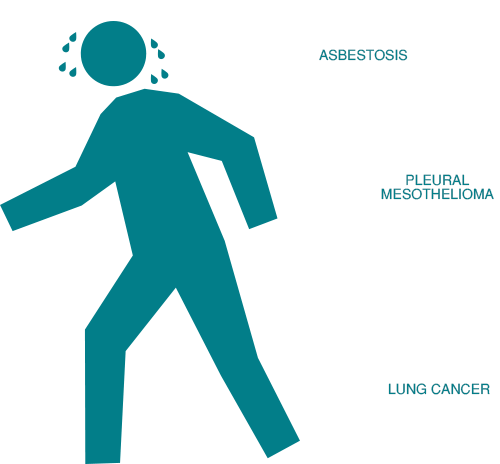 Fatigue can be a symptom of the following asbestos-related conditions:

Both lung cancer and pleural mesothelioma are associated with pain in the chest, which may appear due to the enlargement of lymph nodes, the development of malignant tumors or the accumulation of fluid. When the disease has reached its advanced phases, metastasis to the chest wall can result in pain as well. It may be constant or infrequent, intense or dull, depending on each individual. Moreover, the pain could radiate in adjacent regions such as shoulders, back or abdomen and can sometimes be mistaken for muscle aches. Chest pain is experienced by approximately 64% of people suffering from pleural mesothelioma. It can also accompany pericardial mesothelioma.

Chest pain can be a symptom of the following asbestos-related conditions:

Unlike the previous symptoms, which may often be attributed to less severe conditions, the thickening of the fingertips is a very specific sign of lung cancer. However, it can occasionally accompany heart diseases and arthritis, as well as other affections of the lungs such as cystic fibrosis, lung abscess, and bronchiectasis. The fingertips may become enlarged, swollen or warm and the nails could also change their appearance and texture. It typically occurs in lung cancer due to insufficiently oxygenated blood. Certain chemicals released into the bloodstream by malignant tumors, such as the cytokine, can also lead to the development of clubbed fingers. 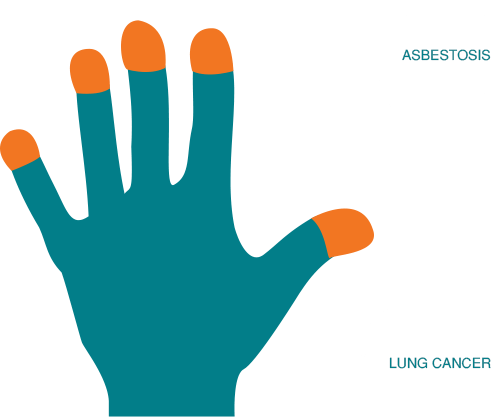 Clubbed fingers can be a symptom of the following asbestos-related conditions:

If recent lifestyle changes did not lead to weight loss, this may be a warning sign of a malignant asbestos-related disease. However, because a decrease in your weight could be attributed to numerous other conditions, it cannot be deemed a certain symptom in this respect and you will thus need to identify more specific potential signs under the guidance of a specialist. Loss of appetite frequently precedes weight loss, as a respiratory form of cancer often prevents you from breathing properly, which can result in appetite loss. Nausea can also affect your appetite in the case of peritoneal mesothelioma. Unexplained weight loss is a very common symptom of multiple cancers, being experienced by approximately 40% of people diagnosed with a malignant disease. 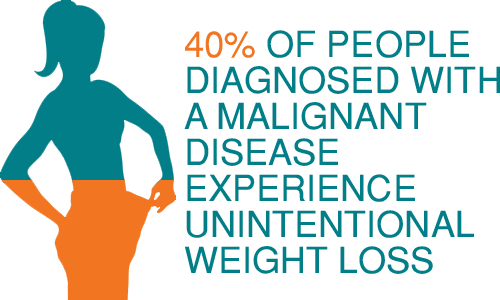 Unintentional weight loss can be a symptom of the following asbestos-related conditions:

Frequent reparatory infections such as bronchitis or pneumonia may indicate a weakened immune system. Due to the body’s constant attempt to eliminate malignant cells in diseases such as pleural mesothelioma and lung cancer, the immune system will often be affected. Additionally, a series of symptoms typically associated with a cold or flu may also appear as the disease is developing in the lungs’ and bronchial tubes’ tissue. Thus, if you experience persistent or recurrent respiratory infections, it is strongly recommended to undergo a complex medical examination in order to rule out the possibility of an ongoing type of cancer affecting your respiratory system. 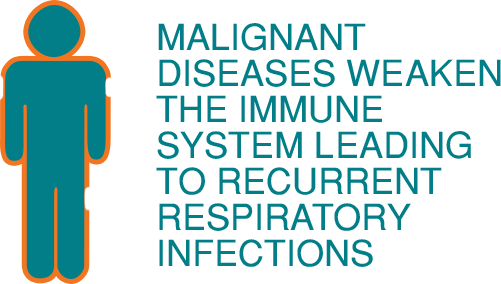 Recurrent respiratory infections can be a symptom of the following asbestos-related conditions:

A persistent cough may be accompanied by spitting up blood-containing phlegm. Although this could be a sign of a less serious respiratory condition such as bronchitis or pneumonia, coughing up blood can also indicate an occurring form of cancer. Hoarseness, a change in your voice and increased saliva production are frequently present as well. Due to the fact that malignant tumors typically have an abundant blood supply, growths located in the chest area may release a small amount of blood, which subsequently travels through the airways when one coughs violently. 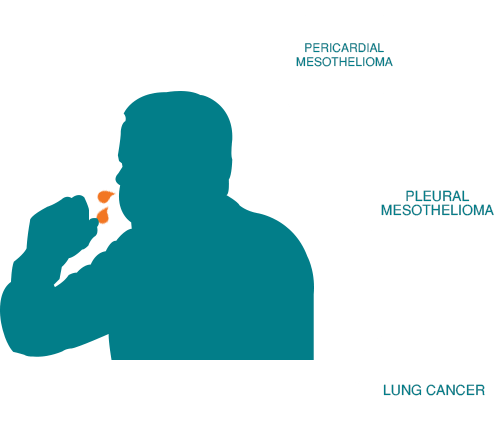 Coughing up blood can be a symptom of the following asbestos-related conditions:

Wheezing is another symptom, which could be mistaken for a sign of less severe conditions such as a common respiratory infection, but it can also be experienced when one is affected by lung cancer or mesothelioma. It refers to a noticeable, high-pitched whistling sound, which accompanies breathing, occurring particularly when a person exhales. With frequently encountered conditions such as bronchitis or flu, wheezing appears because the airways are constricted. However, when a malignant disease is developing, tumors pressing on the respiratory tract are responsible for this symptom, as obstructed or compressed airways make breathing difficult. 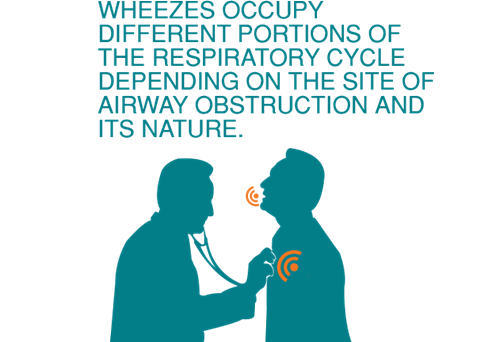 Wheezing can be a symptom of the following asbestos-related conditions:

Fever is not generally associated with asbestos-related cancers in their incipient phases. Nevertheless, this symptom can appear as the body’s immune system is trying to fight the developing malignant tumors. In the majority of cases, fever does not represent a sign of cancer per se – approximately 67% of patients diagnosed with lung cancer experience it as a result of infection, while only 27% of non-infectious fever (also known as neoplastic fever in the case of malignant conditions) occurs due to the tumor itself. Regardless of its type, fever accompanying cancer is not generally constant. The body temperature of a patient suffering from such a disease tends to oscillate greatly over the course of the day and high fever can also be absent for various periods of time. 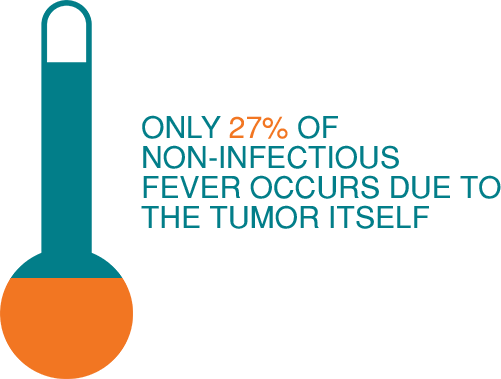 Fever can be a symptom of the following asbestos-related conditions: