Starting his studies at Johns Hopkins University, Dr. Allendorf graduated in 1992. He completed the courses of the Columbia University College of Physicians & Surgeons in 1997 as a medical student. Both Dr. Allendorf’s residency and fellowship were completed at New York Presbyterian, studying general surgery. After completing his studies, Dr. John Allendorf took a position at New York Presbyterian as an administrative chief resident of general surgery, before taking the current position as a general surgeon. Board certified in general surgery, Dr. Allendorf specializes in the treatment of mesothelioma. Working closely with Dr. Chabot, they both develop treatment plans for patients, and use each others' expertise to ensure maximum effectiveness. 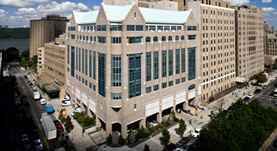 Increased tumor establishment and growth after open versus laparoscopic surgery in mice may be related to differences in postoperative T cell function. Surgical Endoscopy

Increased tumor establishment and growth after laparotomy versus laparoscopy in a murine model. Archives of Surgery

“Dr. Allendorf has performed 3 big abdominal surgeries on me. He was very honest and willing to listen to my situation. I thank God for leading me to Dr. Allendorf. I have been blessed to live many years with my family despite my disease. ”

“Dr. Allendorf is a highly skilled surgeon. He is probably the most caring doctor but I had a thyroidectomy and some lymph nodes removed and I was worried about scaring. The recovery in ICU was good and there is basically no scaring. ”

“Good doctor and attentive staff. Overall I am impressed by the knowledge and surgical skill.”

“The doctor was fantastic, he saved my son’s life by surgically removing his cancerous thyroid. He is a caring and talented man with an excellent staff. He made a bad experience tolerable and created a fantastic result. ”